Posted at 15:03h in Reflections by Meredith Eastwood
Share

“Maybe that’s how the world changes…one father, one child at a time.” Barbara Samuel

Recently I discovered several photographs taken by my son’s father, Tom. Although not a professional, he was a photographer in his spare time.  He left hundreds of photos of our tiny family mostly in the form of sides….we all remember the slide projector. This poignant tale is about Tom’s experience photographing Kent in his grandfather’s rocking chair during the autumn of 1972. We were living in our first home, a cottage in the Historic Meridian-Kessler Neighborhood in Indianapolis. 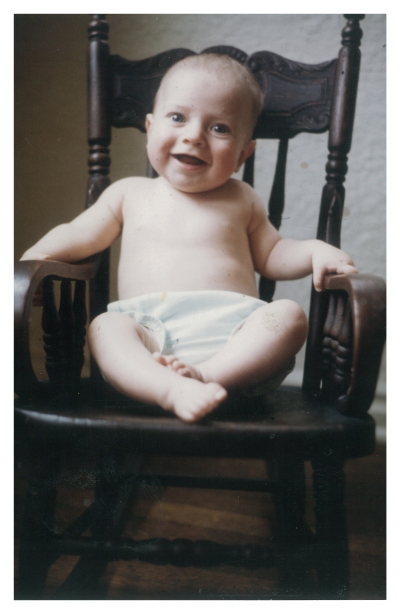 “Hey Jude” played on the record player in the living room.  A precious baby boy was sitting patiently in the family rocking chair, smiling. Tom lifted his camera from his eyes and wiped away the drops of perspiration that had begun to cover his forehead. He didn’t want moisture to cloud the new lens.  He had taken hundreds of photos already, but none had come close to the perfect one he was seeking. It had to be an image of a lifetime, a photographic legacy.

Peering through the view finder, he noticed the rays of the sun streaming through the leaded glass window, splashing like exploding fireworks onto the face of the most important person in his life at this moment.  He shifted the angle of his focus to minimize the bright light, held his breath and clicked.  One day his boy would play that perfect tennis match, go to college, and maybe even become a lawyer like his grandfather. Tom was positive Kent would grow up to be someone special, do great things in the world…make a difference. He smiled and pulled his mind away from the current of thoughts dragging him into the time of things yet to come.

“Kent, look this way. Smile at your hippy mother…over there, sitting on that orange couch. She’s beautiful, isn’t she?”

Kent grabbed the arms of the child’s chair and grinned a sloppy smile. “Geeeee…Geeee. Da Da,” he babbled in gibberish only Tom understood.

“Hey, that’s really good,” he encouraged. “Did you know you’re sitting in your grandfather’s chair. He sat there when he was a baby like you. And I remember sitting in it when I was a boy. There’s some history to this family, and now you’re a part of it.”

Tom heard the laughter behind him. His wife and her mother were taking delight in his continuing efforts. “No, Kent,” he directed. “Don’t look at your grandmother right now! Look at me. Smile! Yes, that’s right. Now just a couple more clicks, and you can play with your toys.”

Tom reluctantly set his camera on the coffee table and sighed. “Oh darn, it’s that stupid cat again, distracting us. First it’s the Beetles, then the bright light and grandma, and now Poppy Pop. Whoever came up with that name anyway….even if he does eat popcorn.”

Kent’s eyes widened as he reached toward the cat with open hands. “Ki, Ki.”

“Ok, I’ll help you off the chair,” Tom said, lifting Kent into his arms. “I don’t want you to fall. You’re always trying to take those first steps. Welcome to the human race, little buddy.”

Tom set Kent down carefully on the thick shag area rug and smiled as his active son tried to scoot toward the fluffy charcoal cat that was now crouched behind the pile of wooden blocks. Turning away from his well-meaning mother-in-law he concentrated on the necessary chores at hand. He separated the new lens from his camera, twisted the protective caps onto both and placed them into the designated segments of his large black carrying case. He had spent hours cutting the sponge-like foam to match the shape of each of his camera’s accessories. It was essential that the camera and the special attachments were kept safe from dust and scratches. Later, he would take additional time in the darkroom to process the photos he had just taken. He might take some rolls to the corner drugstore. Hopefully one would be the perfect photograph…just as this had been a perfect day.

Five years later, when life was too hectic to spend much time taking pictures and most of the photos had been stored in special carousels, death would enter the door of that little cottage unexpectedly.  The grieving son would come to know his father through the hundreds of images he had taken with his camera. He would remember him as a warm attentive man who loved his mother and whose blue eyes sparkled with delight during each experience he shared with family.  The “perfect photo” of a precious son in the antique rocking chair would be prominently displayed in his mother’s home and later in his own home.

Tom left a part of his heart etched in his perfect photo.  He touched this image with more than the click of a camera…he touched it with his soul. He gave his family a legacy of his love.  Kent grew up. He played the perfect tennis match and graduated from law school like his grandfather. And now he is a loving father to three sons of his own, doing the kinds of things he imagined his father would have done with him.  Kent’s mother has a professional camera and takes pictures of those grandsons…trying to capture the perfect photograph.