Posted at 04:58h in Dreams, Dreamwork, Myths and Folklore by Meredith Eastwood
Share

When a spirit animal shows up in a dream and then in waking life, it’s time to dig deeper into its symbolism, habits, myths and legends.

I am sitting on my back porch when I spot a large bear emerging from behind the magnolia tree. I get excited and lift my camera trying to capture its face. Then suddenly an entire tribe of bears follow it into the yard. I hardly know where to focus the camera. They are moving very quickly, coming from beneath the elegant pines on the hill. “It’s a multitude,” I exclaim as my camera shakes in my hand.

I woke up from this dream feeling excited and curious, wondering why these bears have descended upon my house and what the words meant.  Doing a reality check, I recognized the backyard as my designated sanctuary where I sometimes sit with my camera, waiting for the birds and animals that visit. The magnolia tree was like the overgrown bush I’ve been pruning and fertilizing to become a tree. Years ago, I had a powerful dream about a bear entering my house. I have taken marvelous photos of bears at the Indianapolis Zoo.

In my early 30’s while hiking the Appalachian Trail in Virginia, I encountered a bear in the wild. During early morning hours as I was ascending a mountain, the ground beneath my feet began rumbling as though an earth quake was in process.  When I stopped to survey the forest, a huge brown bear raced toward me. Not having time to think, I stood very still. The bear rushed past me. Her fur brushed my face, her paw grazed the side of my backpack, and her cub trailed behind her.  I’ve never forgotten her touch, and today I honor the bear as one of my “spirit” animals. Though I’m still a bit wary of its unpredictable nature, I see the bear as resourceful, strong willed and highly protective. 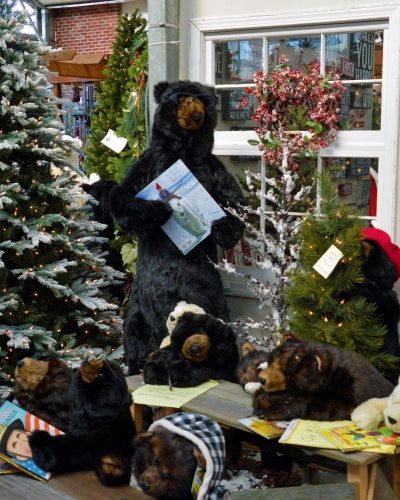 I have since learned that bears have been portrayed as shape-shifters in some legends. They have an excellent sense of smell, and in spite of their size and lumbering stride, they are good runners, climbers, and swimmers. During the winter months, they inhabit caves, hibernating up to 100 days. Most are omnivorous. In many Native American traditions, bears are symbols of strength, healing and powerful medicine.  Also the bear is one of the most common clan animals among indigenous tribes. Many eastern tribes, including the Iroquois have included the Bear Dance among their tribal rituals.

In addition to numerous legends among North American native traditions, there are tales found in nearly every culture about the bear and its medicine. In some areas of the world, the bear has been honored as a sacred animal by Bear Cults in spiritual ceremonies dating back to Neolithic times. For example, the Shamanic Nivkh peoples of Eastern Russia believe the bear is an earthly representative of gods and ancestors, and their rituals include dressing up a real bear followed by a sacred feast where it is consumed.

The Celtic Bear Goddess, Artio, comes from Northern European legends. She is worshiped as a “she-bear,” and the goddess of wildlife and transformation. In her article, “Artio, Celtic Goddess of the Wildlife, Transformation, and Abundance,” Judith Shaw cites Joseph Campbell’s book “Historical Atlas of World Mythology,” supporting the notion that Artio is the Celtic sister of the Greek goddess Artemis, who is associated with bears. The bear is also featured in the stars as the Great Bear and the Little Bear (Ursa Major and Ursa Minor.) The brightest star in Ursa Minor is Arcturus, which is Greek for “guardian of the bears.”

According to Wikipedia, a breadcrumb trail is a navigational tool for use on web pages. But my background as a teacher led me in a different direction with the reality check of my dream. I associated “Following the breadcrumb trail” with the Hansel and Gretel fairytale, and the bears with Goldilocks.

In the fairytale, Hansel and Gretel dropped bread crumbs as they moved through the forest, leaving a trail so that they could find their way home. The children were captured and had to free themselves from an evil witch who intended to eat them. In the various versions of the tale, birds eat the crumbs, yet the children eventually find their way home carrying with them a treasure of precious stones and pearls. Do we not all wish to follow the signs on a path toward home, bringing with us precious soul gifts…after vanquishing that which would eat us alive?

Thinking of Goldilocks, I remember she was looking for the just right place in the bears’ house, one that was a fit for her.  Do we not all seek that perfect place in our lives…in my case, one that offers a space for dreaming? While these fairy tales might have other meanings associated with my dream, these elements stood out as personally relevant. Bringing home gifts of soul and finding the right fit in my house of dreams, where bear energy is strong.

Many dreams spill over into waking life. While shopping for Christmas lights in a local hardware store, I discovered a waking dream similar to the original sleep dream. I gasped as I raised my camera to scenes of multiple stuffed bears set up for holiday displays. The prominent display featured a “Bear School.” Where normally one would see elves and Santas in holiday displays, there were dozens of bears of all shapes and colors, some life sized. “How does this happen?” I asked myself.

I knew I had to take action on this dream and my waking life encounter. I decided to buy a stuffed bear. Unable to purchase one of the huge standing ones that I imagined in a corner of my living room, I settled for one of the larger teddy bear types. When I returned home, I noticed it was a lot larger than the rest of my stuffed animals. I intend to expand my research of bear habits and mythology and learn how the gifts of the bear can become part of my own spiritual practice.  There are certainly enough breadcrumbs to follow. 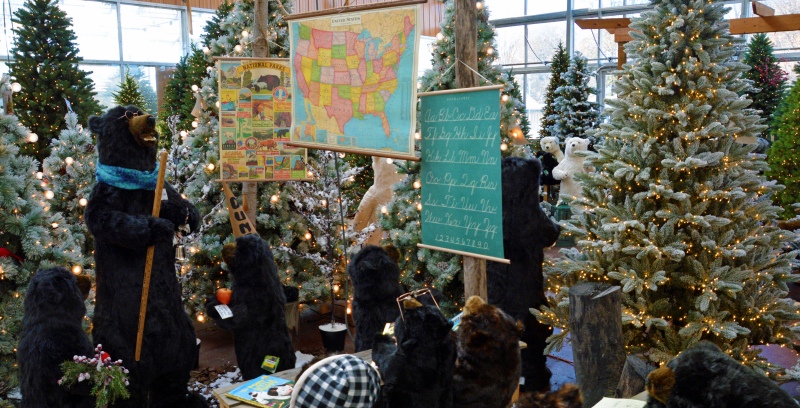