08 Dec A Story for the Season

Posted at 03:07h in Reflections by Meredith Eastwood
Share

“One Message of Love from a Deceased Grandfather Arrives by Mail”

During the late fifties my mother was married to Woody Eastwood. As a result I discovered a picture of Tommy when I was recently going through her photographs. I wanted someone in his family to have it. I believe it was taken when he graduated from Landon High School.

Even though we were not “family” long, I remember Tom as a loving step-son and a fun step-brother. He was always a gentleman and tried hard to make the marriage between my mother and Woody work. I learned of Tom’s death years ago from Kitty Eastwood, who was a good friend of mother’s even before we met Woody.  Looking at the picture today it is still impossible to believe he is gone.

I hope I have located the right Meredith, and if I have not, I hope you will send the picture back.

My heart pounds loud enough for me to hear as I hand Kent his last gift. Brandi sits at his right, loving curiosity on her face. She knows this will be an important gift, but has no idea of its content or of its potential impact. No one else is in the room. My mother remains at home with a cold she does not want to pass along to Brandi who is pregnant with my first grandchild and about to deliver days from today.

“Kent,” I say, “Let me tell you part of the story before you open the gift.”

I feel my eyes tear up and my throat closing. I gulp down the sweet poignancy of the moment. With my voice quivering, I continue:

“Your grandma was spending a few days at my place with the cats. She wanted to go to the cafeteria to eat. On the way out of the complex, I decided to stop and pick up the mail. A small voice told me something powerful was in the mail box. My hands tingled and my stomach churned like the rush you get just before adrenaline kicks in during an emotionally charged situation. I ignored the voice, thinking, there’s nothing I am expecting.

A wave of anticipation surged through me as I got out of the car. I glanced at grandma, knowing it was unusual that I would even stop at the mailbox when she was with me. You see, I didn’t want her to know about the money I owed on my credit cards. I shoved the bent key into slot of my box and turned. When I opened the box, I discovered an 8 ½ x 11 envelop inside. I noticed the return address and a sender I did not recognize. I was from Jacksonville, Florida. I blinked and looked again to make sure it was really addressed to ME. The only person I have ever known who lived in Jacksonville was you dad, Tom and his father Woody. That small voice urged me to wait to open the package until I was alone. 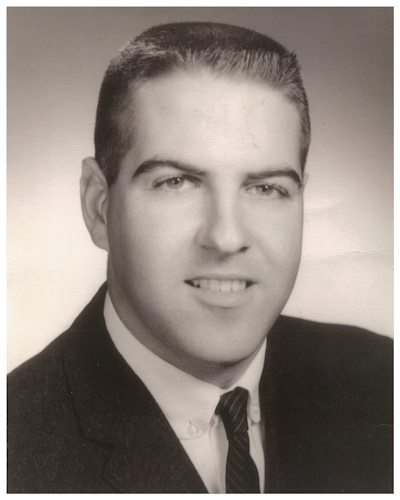 However, curiosity got the best of me. I tore open the package and discovered a photo inside padded bubble wrap. I pulled out the photo and an attached letter. I read the letter first and then looked at the photo. When I returned to my car, grandma saw that something was wrong by the tears in my eyes and the raw expression of tender emotion reflected on my face. She noticed the photo and letter I clutched in my hands. Still stunned, I handed them to her.

When she read the letter and looked at the photo, she cried. Then she said, “It’s Kent’s father, Tom….or his spirit. He is calling out to you. He loved you and Kent so much….and now it’s time for his first grandson to be born. He wants you to know how grateful he is and how much he loves you.”

After I tell Kent the story, I sense his confusion. With trepidation he carefully unfastens the tape and pulls the wrapping paper apart. I hold my breath as he lifts the letter from the piece of cardboard covering the framed photo. He reads the letter and lifts the photo of his father from the paper. He rereads the letter and looks at the photo again.  For one small moment in time reality seems to shift, and I understand the supernatural forces that conspired to bring this photo and its powerful message of love to Kent at this time. I notice the water gathering in Kent’s eyes. He pinches his nose, trying to hold back his emotions. My own heart explodes. I glance at Kent again. I rise, climb over the coffee table and hold him, my little boy once again…the presence of his father nearby.

When I return to my side of the couch I reflect quietly. The photo reminds me of how much Tom wanted Kent when he was born. Tom was an only child, Kent is an only child and I am an only child. In this moment I prayed that the new grandchild would have brothers or sisters. It takes a while for Kent to recover from the poignancy of this gift. Finally he says to Brandi, “Can we hang the picture of my father in the baby’s room?”

Epilogue:  Colton was born on December 30, 2008. In the years ahead, our little family was blessed with two additional grandsons. Rowan Grey was born on February 27, 2011, and Tobin Ezra was born on August 16, 2013. For a time, I lost track of the photo I received in 2008, only to discover it again in Kent and Brandi’s home during Thanksgiving this year. Today a photo of Kent’s father sits proudly in the boys’ bedroom, a seasonal reminder of Love from their grandfather.