Nature is a temple whose living colonnades
Breathe forth a mystic speech in fitful sighs;
Man wanders among symbols in those glades
Where all things watch him with familiar eyes.
— from Correspondences by Charles Baudalaire

I spent two gorgeous days during this first weekend of September with Colton, my oldest grandson. As we sat eating an early dinner on Friday evening, I wondered what special thing I might do with this precious boy.  I had no idea how the two days would unfold. 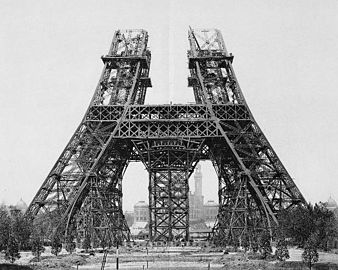 15 May 1888: Start of construction on the second stage of the Eiffel Tower. Public domain image via Wikipedia.

For our first activity that evening, I chose “Leap,” an animated film about a young orphan girl living in Paris during the late 1800’s who dreamed about becoming a Ballet dancer. I had no idea what the film was about when I chose it, recognizing it as the only PG film available in the mall area. I noticed that Colton was especially interested in the setting for the film which featured a partially constructed Eiffel Tower, the Statue of Liberty in the process of completion, and the Palais Garnier, a famous Paris Opera House. During the film he began asking questions about them. I told him we would Google them when we returned home. Later that evening, Colton worked on a new Lego set, and we watched scenes of animals being rescued from floods in Houston, making the decision to donate to the rescue efforts of the Humane Society. The earlier conversation had been forgotten.

However, dreams have a way of pursing us and speaking to us in mysterious ways. The next morning as we were watching more internet videos, Colton’s questions about the Eiffel Tower arose again.

“Let’s look up the Eiffel Tower and see when it was constructed,” he said. “And what about the Statue of Liberty?”

We discovered that the Eiffel Tower was constructed by Gustave Eiffel between 1887 and 1889. It would become the entrance to the 1889 World’s Fair. Then Colton learned that the Statue of Liberty, was designed by French sculptor Frederic Auguste Bartholdi and was also built by Gustave Eiffel. The statue was dedicated on October 28, 1886 and became a gift from the people of France to the people of the United States.  Researching on Wikipedia, Colton identified a photo taken of the partially completed Eiffel Tower that had been depicted in the film “Leap” we saw the previous night. Then Colton wondered about the building where the ballet was depicted in the film. We found a photo of the Palais Garnier, a 1979-seat opera house that was built from 1861 to 1875 for the Paris Opera.

“That’s it!” exclaimed Colton. “Remember the seats in the film and the roof where the girl danced?”

I read to him “The building was also the inspiration for The Phantom of the Opera, a book by Gaston Leroux.” I wondered if one day he might remember this little detail. We discovered all this information and more, too much for an 8 year old to absorb in one gulp, on various online sites including Wikipedia.

The conversation continued. Colton wondered about the catacombs in Paris and then asked about different wars. We talked about the Civil War that also happened during the 1800’s. He had been curious about who was fighting whom. We briefly talked about the world wars of the 1900’s (or 20th century) and took a look at the world map to better understand the world’s geography and its continents and countries. Colton decided he wanted to move the map of the world in the playroom at his house to his bedroom. We ended our geographical explorations gazing at photos of Stonehenge, Easter Island, and learning about the myth of Atlantis. While there was no end to his curiosity and our rambling dialogue, Paris and everything French wanted to be heard above the other topics, as I discovered later. 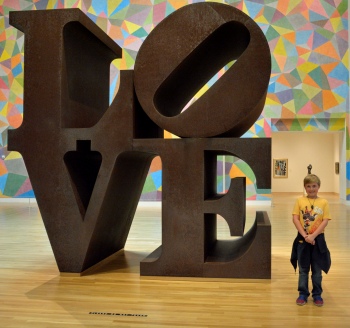 “Love, Colton” – Photo by Meredith Eastwood taken at the Indianapolis Museum of Art

Later that afternoon when we went to the Indianapolis Museum of Art.  Colton discovered the Picasso exhibit (From Picasso with Love) on the same floor where the mini golf course was located outside on the roof. We spent time looking at the two paintings that were on display (“I Love Eva” and “Ma Jolie”) learning that while Picasso was originally from Spain, he spent most of his adult life in Paris.

When we approached one of the pools in the Oldfields Gardens near the Lilly House, Colton asked if I had a coin. “It’s a place to wish,” He said.  I told him that I didn’t have one, but that a person could make a wish with anything he might consider valuable, like a special stone. He ran off searching for that something special. It turned out to be a rose petal. As he stood next to the pond and threw that small petal into the water, I wondered what his wish might be. Later I unearthed a hint of what it might have been.

After the museum, on we went to the theater for the Emoji Movie. As we were waiting for the movie to begin, Colton said, “I would love to go to Chicago.”

I said, “There’s a wonderful Museum of Science and Industry there, and it’s close to Indianapolis. Maybe we can go there for one of the school breaks.”

Then suddenly, a clip appeared on the movie screen about the Smithsonian Museum of Natural History. Colton said, “That’s strange. We were just talking about museums and we just went to one.” We decided to call his dad and tell him the idea we had for one of the school breaks. Still waiting for the trailers to be shown, I told him about the Musee du Louve in Paris.

When I finally delivered a tired 8-year-old home, Kent said to me. “Have Colton show you the new lamp he got for his bedroom.”

When I went into his bedroom, he proudly pointed to a shade supported by a perfect replica of the Eiffel Tower. I said to him, “I might believe that all the coincidences these past two days about Paris might mean that someday you are meant to go to there.” I also wondered what Colton’s wish might have been in the wishing pond. Certainly a rose petal would help it come true. As it turned out, the weekend was filled with many “gifts of resemblances” and treasured memories. 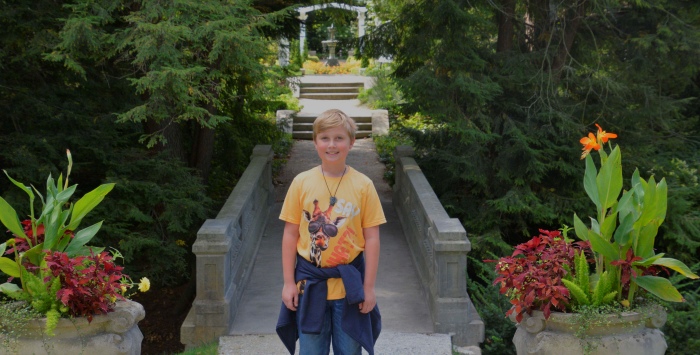 Colton Poses on the IMA Grounds – Photo by Meredith Eastwood

The term “gift for resemblances” used in my title came from an ancient Greek authority on dreams, Atemidorus of Daldis, who “said that the great requirement for a successful dream interpreter is “a gift for resemblances.”
(Quoted in The Three Only Things by Robert Moss, p. 130.)