26 Feb Hawk’s Medicine: My Magical Relationship with a Spirit Animal

Posted at 17:23h in Reflections, Spirituality by Meredith Eastwood
Share

“Out of the peak’s black angularity of shadow, riding
The last tumultuous avalanche of
Light above pines and the guttural gorge,
The hawk comes.”
Robert Penn Warren (Evening Hawk)

The story of my relationship with a stern-eyed hawk named Apollo is told mostly through my photographs of him. On mild breezy days when he perches on a nearby fence, his eyes seem to widen in recognition as I approach him. Then he turns his head so that only one eye is visible.  As he rotates around, I notice his backside is layered with sleek feathers that slip into a long sculpted tail with horizontal stripes. I have taken so many photos of this bird that I sometimes believe he is more than one. Perhaps he is! For in some photos he appears to be a Coopers Hawk, Marsh Hawk or Sharp-Shined Hawk, and in others he looks like one of the 16 recognized sub-species of the beloved Red-Tailed Hawk, known to some also as the “chicken hawk.”

Apollo has shown up on special days; Thanksgiving Day, New Year’s Day, the days previous to significant travel adventures, and during the month I moved into my new cottage.  When the carpenters were completing the first remodel of my library they spotted him each morning perched in the tree near my door.

The most magical appearance of Apollo was on Valentine’s Day. It had been over a month since I had last seen him. I stepped outside with my camera just as a short-lived winter thunderstorm swept through my neighborhood. I had intended a morning walk. Icy splinters swirled around my face as the wind howled and trees bent beneath the force of unpredicted squalls.   Suddenly I noticed him, his hooked talons gripping the top of a nearby fence and his wings wrapped around his sides.  His stiff-feathered head bristled as he turned his face against the wind, and his brown-speckled white plumage plumped up like a fine cloak against the gusting ice. I was reminded of a ship’s sails on a blustery sea. My breath caught in my throat, and my heartbeat quickened as I lifted my camera.

“I am honored,” I said, clicking a photo as a tear froze on my face.

The fierceness of his luminous staring eye matched the fire of love I felt for this magnificent creature on that special day. And I was reminded that nature is one of our best healers.

When I first heard about power or spirit animals, I thought about a favorite animal or what my friends might call a totem animal.  But I now realize they are represent much more. When they appear to us in a dream or in our waking lives, they are offering us special gifts. And it is not necessary or even advisable according to some shamanistic practitioners to accept the interpretations offered by reference books on spirit or power animals. Our animal spirit guides are sharing their energies with us, and if we accept another person’s interpretation, we may not understand how that animal’s gift is specifically intended to aid us. Instead we might talk to the animal, asking what it is trying to teach us, or we might study it in nature as we research its habits, connections to legend and to the environment where we live.

Friends tell me that the hawk is considered a messenger from the spirit world, that I should pay close attention for a message arriving in the future.  According to many resources, including Ted Andrews, I learned the hawk is a symbol of visionary power, mysticism, and that they are protectors of the air, having the keenest eyes of all birds other than the owls. The red-tailed hawk shows up when one is moving toward “Soul” purpose, and it teaches the balance necessary to find that purpose, while also inspiring creative ideas. I also learned that a hawk can live up to 14 years in the wild, and the number 14 is tied to astral travel and to the bold expression of a person’s vital energies. Finally, I read that a hawk will be with a person over the long run, once he becomes a presence in his or her life.

The hawk has been part of the mythology of many cultures. Egyptians believed the hawk or falcon to be a symbol of Horus and guardian of the pharaoh. Horus was the most important god in ancient Egyptian mythology, known as the god of sun, sky and kingship. The eye of Horus was intended to protect the pharaoh and was painted on numerous items, including walls of tombs and the bow of vessels. In Greek mythology, the hawk was associated with the goddess Circe and Hermes, the messenger of the gods and was also considered a messenger of Apollo.  For Native Americans, hawks have been symbols of courage, strength and protection for mother earth. Their feathers are sacred and they are featured in many indigenous legends.  In one Lakota Sioux story a hawk name Cetan is associated with the qualities of speed, dedication and good vision.  Hawks and eagles are part of European legends as well.  In Iceland an old manuscript shows a hawk named Veorfolner sitting between the eyes of Hraesvelgr, a giant eagle perched on top of the world tree (Yggdrasil)

The hawk’s visual acuity is due to special color receptors in the eye that perceive the ultraviolet part of the spectrum; plus their photo receptors vastly outnumber those in humans. I love the way my hawk observes, seems to focus and to set his sights on what he is seeking. I imagine the bluebirds, mice and rabbits that might be his meals. I feel strength, pride and stability in his presence.

The magic of my relationship with my hawk has been like a tap on the shoulder, advising me to look closer at things, to dig deeper, to see beyond the obvious, to observe situations around me with a clearer focus and to view the world from a higher perspective without losing sight of important details.   I purchased a child’s stuffed hawk as a reminder of the energetic qualities of the hawk’s vision. During my conversations with Apollo, he has helped me remember and reenter dreams. Also he has aided me in processing issues and challenges in my life with incredible insight. And finally his hawk energy has awakened my vision to the things that inspire me to spread my wings and soar.

Advice I often hear from Apollo: “Please think about what you will do to honor our connection; perhaps you could eat a piece of chicken now and then.” 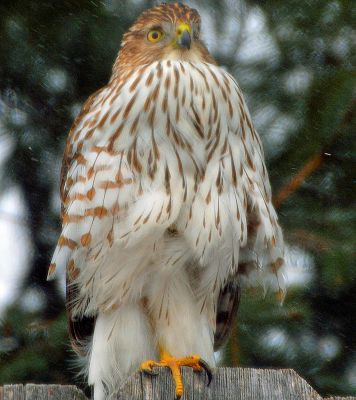 This morning
the hawk
rose up
out of the meadow’s brose
and swung over the lake–
it settled
on the small black dome
of a dead pine,
alert as an admiral,
its profile
distinguished with sideburns
the color of smoke…”
Mary Oliver (Hawk)