26 Mar If the Easter Bunny Could Talk

Posted at 19:12h in Myths and Folklore, Spirituality by Meredith Eastwood
Share

A Fanciful Description of Bunny Folklore

In the Voice of the Hare

I have the real story to tell about the history of the Easter Bunny.  But first let me get one thing straight.  I’m no ordinary rabbit, and certainly not a “bunny.”  I’m a hare, descendent of the rabbit god named Hare who served as spirit guide to the goddess Eostre.   According to Hare mythology Eostre created that first rabbit from an egg-laying bird.  Then, the Earth Mother made Hare a royal animal because he was wise in the affairs of environmental renewal. Over the years the Hare became an emblem representing love, fertility, resurrection, and rebirth. Today our race is named after our god and we, the REAL Easter Bunnies, are hares.  For years, members of my race created their burrows near the lapwing birds that nest on the ground in the early spring.  The hares often sat on or near the nests of the birds, giving rise to the rumor that hares had laid eggs.  Humans became confused.  So we’ve earned the reputation of being “Mad March Hares.”

We hares worship the moon, and our favorite celebration is Easter.  Hare mystics know this ancient celebration is really about resurrection and rebirth, the germination of new life. So it’s not about jelly beans, chocolate bunnies and Peeps cradled in baskets of plastic green grass given to human children. However, perhaps the “Easter Bunny” is a bit like the Santa Claus who brings treats and gifts to obedient children. In fact during the 1700’s my German ancestor, the Easter Hare, judged whether children were good or bad during the season of Eastertide before carrying colored eggs and toys in a basket to their homes.

Much of the hare story about the connection of Hares to the season of spring has its origin in Celtic mythology. It is a story that was absorbed into other cultures, religious traditions and rituals commonly celebrated around the time of the vernal equinox in the northern hemisphere and associated with the Christian holiday honoring the resurrection of Christ.

In ancient times, everyone thought Eostre was the dawn goddess.  As the story goes according to Hares, each morning when the dawn goddess came to visit the god of darkness she radiated a golden glow so bright, the dark god grew weaker each passing day, retreating further from her growing power.   Humans were so grateful for her strength and energy they created celebrations in her name.  The origin of both words Easter and east come from a Sanskrit word also meaning dawn. Her increasing light and warmth made rebirth possible, hence the “dawn” of a new life cycle. If humans were smart enough they could easily understand the symbolic nature of the legends surrounding my race.  In addition to bringing colored eggs to humans as representations of new life, members of my race are prolific, universally accepted as fertility experts.   In fact, in ancient Egypt the Hieroglyphic symbol for the word “existence” was a pictograph of one of my ancestors. 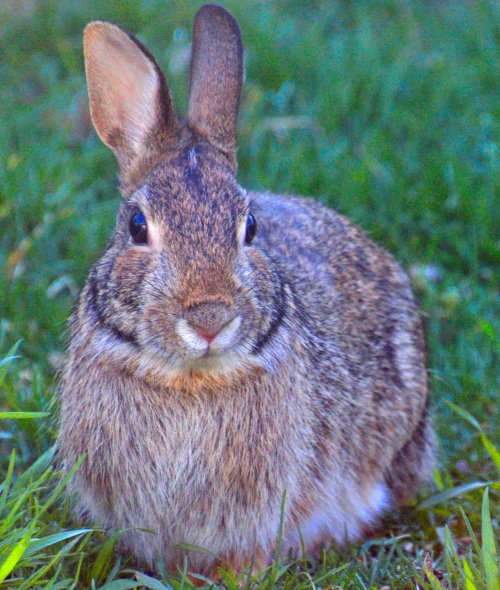 My ancestral hares are depicted in art and story throughout history in a number of cultures.  Asian symbols of the hare representing peace and tranquility can be found in ancient metal works and on coins. The Buddhists recognized our symbolism in a tale about a selfless hare where instead of imagining a man in the moon, they saw a “Hare in the Moon.” A number of sacred sites including medieval churches portray a circular motif of three hares as part of architectural ornaments.  This design is thought to have symbolic associations with fertility and the lunar cycle or presumed to be a symbol of the Trinity. Even famous artist, Albrecht Durer, created a painting entitled, “Young Hare” in 1502.  For generations humans believed my relatives carried the souls of the dead, and for centuries around the time of the Spring Equinox hares have been commissioned to deliver eggs full of life to awaiting Mother Earth.  These are just a few facts that explain how important we are to the cycle of life throughout the history of humanity. There have been entire books written about the symbolic associations to the Hare. In fact, humans continue to be fascinated by our race. In June 2014, the Institute of Russian Literature of the Russian Academy of Science hosted an international conference entitled, “The Philosophy of the Hare: Unexpected Perspectives in the Research in the Humanities.”

In the modern world we hares continue to serve the world as joyful creatures of goodwill.  We supply human children with baskets of enough processed sugar to last their lifetimes.  Finally, we are a lucky race.  And as our souls pass into the next generations of hares, we leave behind a legacy of protection, our rabbit’s feet.

As you move through this time of creative renewal, do as the hares do.  Cast off icy thoughts, frosty behaviors and heavy relationships.  Feed yourself fresh carrots.  The eggs of a new beginning have hibernated long enough.  While the forces of light and dark hang in the balance during the Vernal Equinox, prepare to leap into life and joyfully face the dawn of the rising sun. Your eggs of rebirth are ready to hatch.