25 Jun Pass It Forward: Synchronicity of a Hidden Hand

“Synchronicity is an ever present reality for those who have eyes to see.” Carl Jung

“The gods love to travel in disguise…. look for the hidden hand.” Robert Moss

During the early part of June I attended an Active Dreaming workshop entitled “Active Dreamer 24/7: Living by Synchronicity” in Madison, Wisconsin led by Robert Moss. While there I helped a fellow participant named Jeff by taking photos of him for a business project.  When I refused payment for my service, he handed me a $100 bill. He told me it was one of five bills that he was giving out as a “tip” to honor a man who had recently died, a man he respected greatly. Jeff then requested that I pass it forward to someone in the future as a REAL tip for a service rendered.  Stunned and honored, I held the bill in my hand for several seconds, imagining how a future recipient might feel.  Then I put the bill in my purse intrigued by the possibilities.

When I delivered the photos to Jeff, he sent me a summary of the story that had inspired his decision to tip five individuals with a $100 bill. Here is his letter:

My boss and mentor was Sal Ferrara. Among many things, he was a huge Chicago Black Hawks supporter. It is sad to think he is not here to enjoy their winning of the Stanley Cup tonight. Attached is a picture of Sal holding the cup where I filled it with water.  I then collected the water and made a Chinese healing liniment with the water.

Sal was notorious for never carrying anything but $100 bills. No matter the size of the check, his minimum tip was $100. Sal passed away last Thanksgiving Day after a 3-month battle with esophageal cancer. At his funeral his best friend talked about how this was a very sad day for every server and waitress in the Chicago-land area. He was always a generous tipper. He was generous in many ways.

His family asked for donations to a fund for esophageal cancer research. That just did not seem enough for me. I chose to set aside a number of $100 bills to tip people that Sal would have enjoyed. I was not prepared for the joy that I received by giving a $100 tip. It has become quite addictive.

The day after I returned to Indianapolis, Ruth, my household assistant, greeted me at the front door wearing a t-shirt that said, “Don’t Let Your Dreams Stay Dreams.” Ruth has been a friend and assistant for a number of years helping with errands, house sitting, and organization. Plus she wields a chain saw with great skill.  Her life story began as an orphan in Korea, so her greatest gifts to her friends have been constant reminders to live life with gratitude, kindness and a sunny attitude.  On this particular morning, Ruth told me about a co-worker at her place of employment who collected scrap metal to sell for extra income.  Ruth recounted how she had helped her co-worker by purchasing a metal car door from him, knowing he might need extra money. Then she GAVE the door to a neighbor who owned a scrap metal business. Hearing her story and knowing her as a compassionate person, I made the decision that she would be a worthy recipient for a $100 tip. At the same time I wanted to tip someone I did not know. So I decided to match the bill with one of my own, giving two tips.

I decided to give the second tip to a new resident in Indianapolis who is unemployed and looking for a permanent job. She has been doing odd jobs and was one of the workers who trimmed my backyard. I learned that she sings in her church choir and came to Indianapolis because she “dreamed of a better future for her life.” It was her positive attitude that caught my attention…and the realization that we all dream of a better life. And so the circle of synchronicity grew larger.

Recently, Ruth and I stopped at a statue she had been admiring because she wanted to have her picture taken in front of it. As I stood there with my camera adjusting the lens, I imagined the statue as a perfect symbol for this story. Just as I clicked, Ruth yelled, “This is a Robert Moss moment.” She later told me she had read one of Robert’s books in my library, The Three Only Things: Tapping the Power of Dreams, Coincidence and Imagination. She added that she recognized the flow of synchronicities in the story as it was told and acted upon. And then she said, “Caring and sharing, are these not tools of an Active Dreamer?”

A special thank you to Jeff Bogusz for setting in motion this story with one $100 bill. I have a feeling this storyline is not over yet. 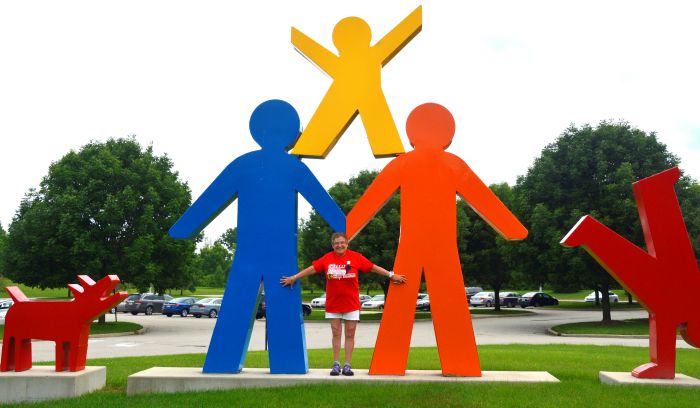 Ruth and her favorite statue

“It’s a poor sort of memory that only works backwards.”
– Lewis Carroll (Through the Looking Glass, the White Queen speaking to Alice)