Talking to a Grandson about a Troublesome Dream

This year’s “Spring Break” for my oldest two grandsons, Colton and Rowan, arrived before I had prepared a special outing. When my son asked, “Mom, what would you like to do with them?” I decided to create an adventure they would never forget. I named the adventure, “Hippy GA GA’s Black Dragon Adventures,” a combination of movies, Legos, and a nature outing, accompanied by a Black Dragon puppet named “Disco Dude.”

The highlight of our three days was spent at Turkey Run State Park located in west central Indiana where we hiked the rugged trails on the other side of a suspension bridge that stretched across the flooded Sugar Creek. Mud, rain and slippery rocks didn’t deter our determination to enjoy the spectacular scenery that is part of the Rocky Hollow-Falls Canyon Nature Preserve.

On each of our days hiking, Colton read the confusing trail map with great skill and played guide to Rowan, his younger brother as we climbed past Crevice Cliff and a series of more than 100 steep wooden stairs, and rocky steps. Disco Dude and other stuffed spirit animals slept with us on two king-sized beds in the Inn where the boys spent their evenings in the game room and the swimming pool. 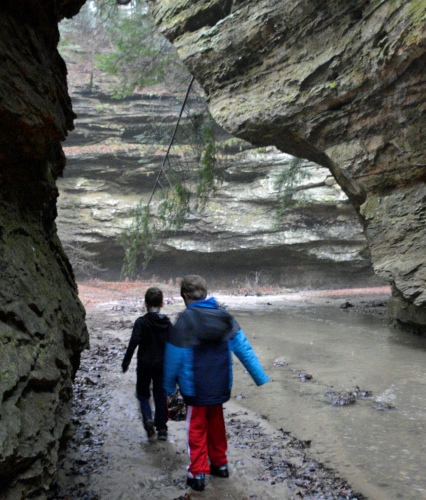 At dinner during our second night, I noticed Colton drawing a colorful picture on his table mat. He told me it was a picture of a woman from a recent dream. Colton is familiar with the Lightning Dreamwork Process used in Active Dreaming, so we began the process. I asked him to tell me his dream.

He said, “In the dream I was looking into a mirror and saw that I was dark colored. There was a lady standing next to the mirror. She was trying to turn me into a wolf.”

“Is that the whole dream?” I asked. He nodded his head. Then we became diverted to another conversation when the waiter arrived at our table and we had to decide what to eat at the buffet table. The boys quickly finished their meals and ran to the game room. So the dream was briefly forgotten.

At breakfast the next morning, I resumed the conversation with Colton about his wolf dream. I asked him to tell me the dream again and give it a title. He told me the same dream about a woman who was going to turn him into a wolf. He named it. “The Woman and the Mirror.”

I asked him how he felt when he woke up from his dream. He said, “A little scared about the woman’s intentions.”

I asked him what he wanted to know about the dream?  He answered, “I want to know what was going to happen next.”

We talked about the elements of the dream in waking life. During our discussion, I asked him what a wolf meant to him.  He said, “A wolf can find its way through the woods, like I do on the trails here at the park.”

I added to his comments. “If it were my dream, I might also remember how the wolf is known to be a loyal member of his family. And I might see myself as a wolf who helps and guides others in his tribe.” He nodded enthusiastically.

I saw an opportunity to help him shift perspectives about the nature of his dream. I told him about how Native Americans sometimes believed that a human could shapeshift into animals or birds. That they could adapt the qualities of a certain animal or bird for use in human life.  And that some tribes believed that one was born into a specific animal or bird clan. Then I said, “If it were my dream, I might feel as though I had been gifted by the woman in the dream the qualities of the wolf like we are discussing. The ability to find my way in the woods and to guide others.” His eyes lit up, and he reminded me that I had given him a stuffed wolf last year. (An animal he has claimed as his spirit animal.)

Then I explained to him how he could possibly see what would happen next in his dream by dreaming it forward. I said to him, “If it were my dream I would want to reenter that dream. I might try lying in my bed as I was going to sleep and imagine myself back in that same place with the mirror and the woman. I might see myself as a wolf and visualize what it would feel like to find my way through the woods as that wolf. And then to guide the members of my wolf family just as I have done during the weekend with Rowan and me on the rugged trails.  I might also ask myself how the qualities of the wolf could be part of my human way of living. He seemed to like this idea. He especially liked the ideas of being loyal to his family, and serving as a guide for his tribe.

Finally, we addressed the last step of our process, the Action Plan. We visited the Gift Shop and purchased a wolf pendant that hung on a leather necklace. It had a tag attached to it, identifying it as a “wolf guide.” It was a perfect item to purchase to honor the dream and to provide a sense of protection for him during any dream that may make him feel scared or uneasy.

As the weekend came to an end, I asked Colton if he might be able to see the dream differently than he had originally experienced it. I also asked him if he could possibly change the title of the dream. After a few stabs at altering the title, he settled upon “The Woman’s Gift.”

Our weekend ended with muddy shoes, wet clothes and a lost Kindle. But Black Dragon Adventures will always be remembered.

Special Note: Turkey Run State Park is home to some of the most scenic and “ruggedly beautiful” trails, which include old-growth walnuts and sycamores. Sugar Creek runs through the park, offering an abundance of wildlife like deer, beaver, pileated woodpeckers, and eagles. In pioneer times, large flocks of wild turkeys lived in the area, finding shelter during the cold months on the canyon floor. Several historic buildings have been preserved in the area including “Lieber Cabin,” the home of Col. Richard Lieber, honored as the father of Indiana State Parks.